Biolink Model is a high-level data model built to provide a schema for representing biological and biomedical knowledge. The model itself is agnostic to the graph formalism used to represent knowledge. i.e. You can use Biolink Model as a schema for labelled property graphs (Neo4j) or for edge labelled graphs (RDF).

Biolink Model was built with the following aims:

To that end, Biolink Model makes use of linkML (Biolink Modeling Language) for defining the various semantics of the model.

Models are authored in YAML; using linkML one can generate a variety of artifacts including JSON-Schema, OWL, RDF, Python data classes, Shape Expressions, and Markdown.

Refer to linkML on GitHub for a more detailed guide on linkML.

Note: Biolink Model is authored using linkML. While Biolink Model and linkML share a “Biolink” in its name, that is where the similarities end. One can use linkML to author any schema for any domain.

Structure of the Model

Biolink Model is a high-level data model where entities, associations, and predicates are arranged in a hierarchy. The model also defines node properties, edge properties, and types.

In Biolink Model YAML any class, slot, or type is defined in sentence case form. When this model is compiled to various forms (like JSON-Schema, OWL, Markdown) the representation is based on the following convention,

To avoid ambiguity in semantics, prefixes are MUST for classes and certain slots.

To avoid ambuguity it semantics, prefixes are RECOMMENDED for all slots.

At a glance the structure is as follows,

A class represents an entity or an association. A class can have one more slots (properties).

In RDF sense, a class is basically rdfs:Class.

Within the Biolink Model there are two hierarchies of classes:

where Named Things are disjoint from Associations.

But they do share a common ancestor class: entity

In a graph formalism, ‘Named Things’ are represented by nodes in a graph.

Each class in the named thing has one or more slots (properties).

The root of all entities is the named thing class.

Associations are classes that represent an assertion or statement.

In RDF sense, an association is an rdf:Statement.

In a graph formalism, associations are represented using edges in a graph.

Associations help us to make assertions about the world. For example, we can say that a gene is associated with a disease. Or we can say that a gene is a member of a pathway. Associations also help us constrain the meaning of an edge, or add context to the edge that describes how or when the edge takes place. In fact, we also use association objects to hold references to the publications, confidence scores, and other metadata that we use to support our assertions.

Associations are arranged in a hierarchy where the root of all Associations is the association class. In general, Associations have three main properties (or slots):

The predicate in an Association is always a Biolink property (or slot) that is or descends from the “biolink:related_to” property. Predicates in Biolink often are exactly equivalent to relations in the Relations Ontology.

Together, the subject, predicate, object, and optional qualifier(s) comprise the full semantics of the statement that an Association puts forth as true (i.e. its ‘S-P-O-Q’ semantics). Association objects may also include slots to hold additional metadata about this core statement - primarily information about the provenance and evidence supporting it. Using these elements together we can build Associations with many possible ‘layers’ of complexity (Figure 1). Some Associations may simply consist of an S-P-O triple. Others may represent more complex statements that employ multiple qualifiers, supported by rich evidence and provenance metadata. For example, Figure 2 provides a layered view of a complex Disease to Phenotype Association instance.

Figure 1: A layered view of a simple a Biolink Association object. 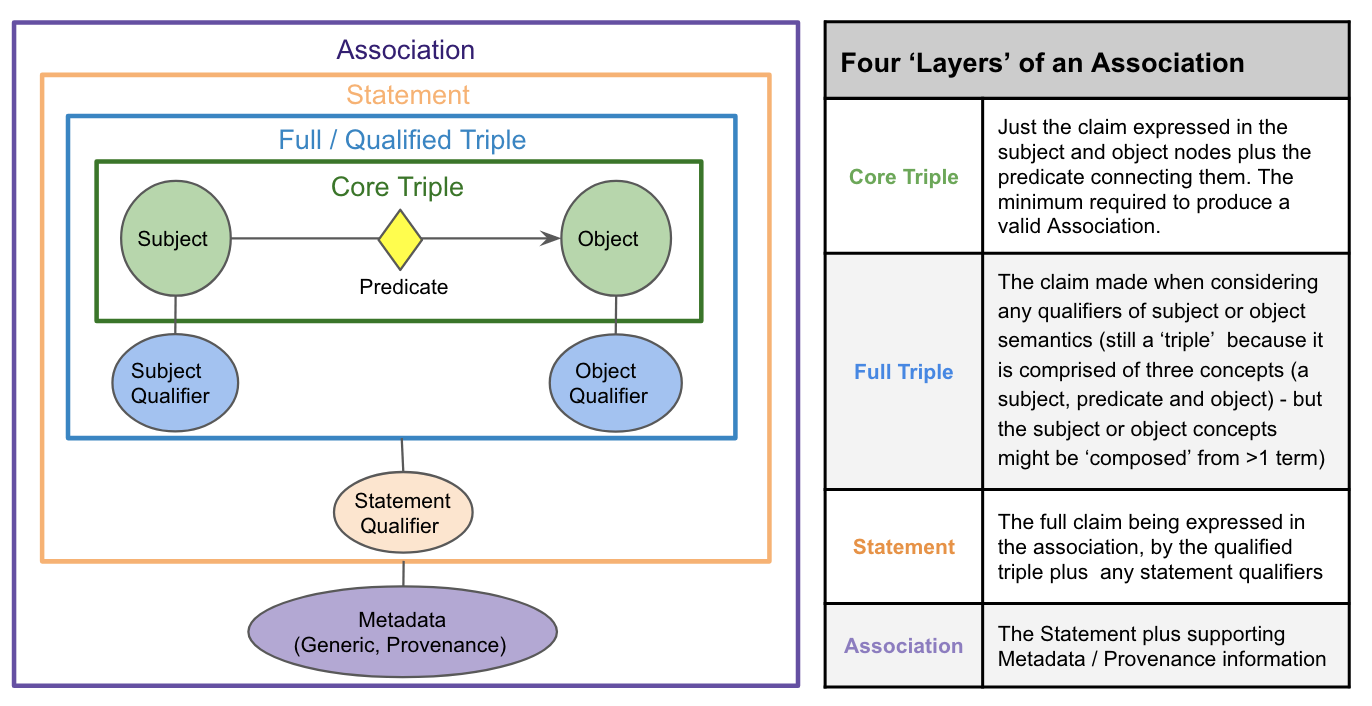 Figure 2: An Association representing the Statement that “Late Stage Ebola has phenotype Severe Bleeding with 92%
penetrance in adults”, and some provenance metadata supporting this. This representation leans heavily on qualifiers for representing Statement semantics. 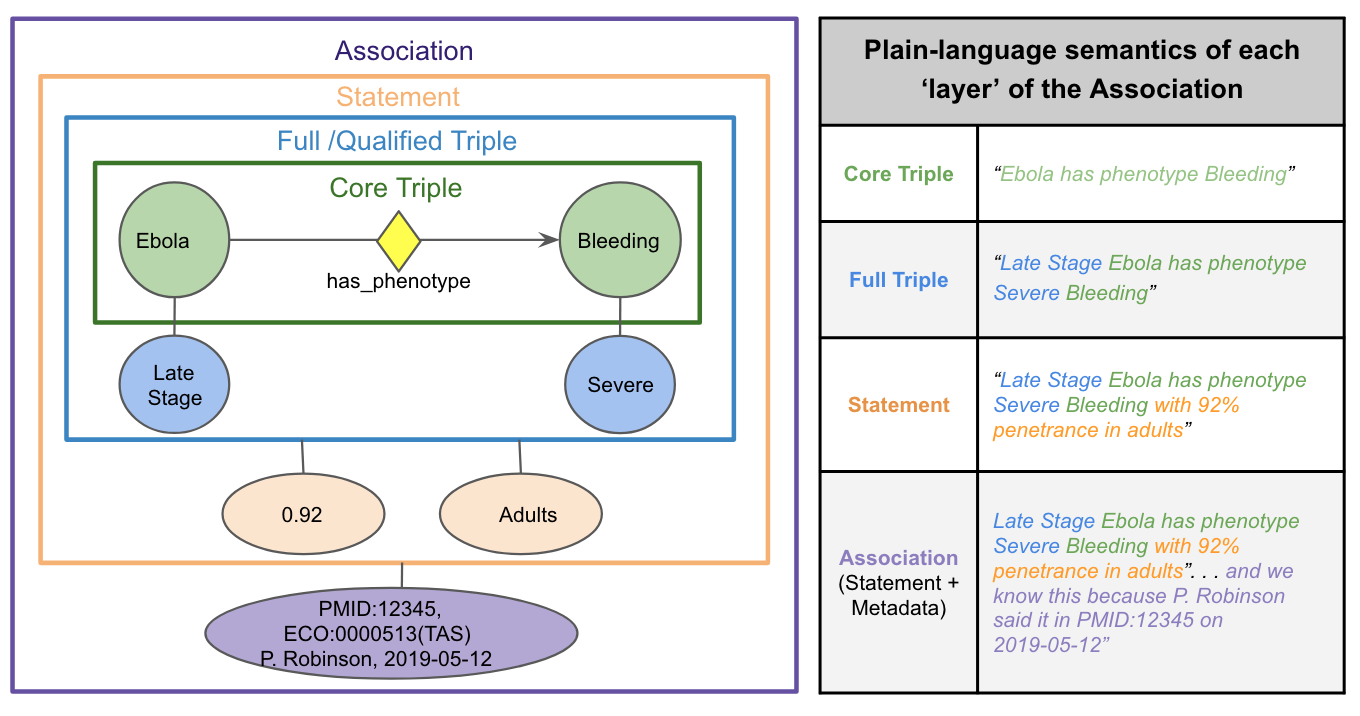 At the highest level we distinguish two kinds of qualifiers that contribute to an Association Statement:

Sometimes, seeing several examples of a modeling pattern is most helpful in applying the pattern to your own data. To peruse our examples, please visit: Association Examples With Qualifiers

Please refer to Curating the Model for more information about making new Associations or making changes to existing Associations.

Mixins are defined as a way of encouraging reuse of specific slots (properties) while ensuring a clear inheritance chain. Mixins are used to extend the properties (or slots) of a class, without changing its position in the class hierarchy. Mixins can be extremely helpful in a number of ways:

In general, while mixin slots and classes should not be directly instantiated, or used directly as a slot in a class, KGs can use them as a substitute for multiple inheritance. For example, a KG might wish to determine what are the parents of a certain class. In this case, the KG should navigate a mixin used in a domain or range of a class or slot, as it would the “is_a” demarcation.

In Biolink Model, slots represent properties that a class or an association can have.

A slot is similar to rdf:Property where it can link

In Biolink Model slots are used to represent

In a graph formalism, predicates are relationships that link two instances.

In an OWL sense, predicates are similar to owl:ObjectProperty.

Node properties are slots that an entity class (i.e, a node) can have.

The root of all node properties is biolink:node_property slot.

In an OWL sense, node properties are similar to owl:DataTypeProperty.

Edge properties are slots that an association class (i.e., an edge) can have.

The root of all edge properties is association slot slot.

In an OWL sense, edge properties are similar to owl:DataTypeProperty.

linkML provides a handful of inbuilt data types. But you can also define custom data types using the modeling language.

In Biolink Model we have several data types.

Data types are not arranged in any hierarchy.