Before curating the Biolink Model, we recommend that you familiarize yourself with the basics of LinkML.

In Biolink Model all the curation should happen in one place: biolink-model.yaml This is the one source of truth for the model.

This section explores how to go about adding new classes and slots to the model. 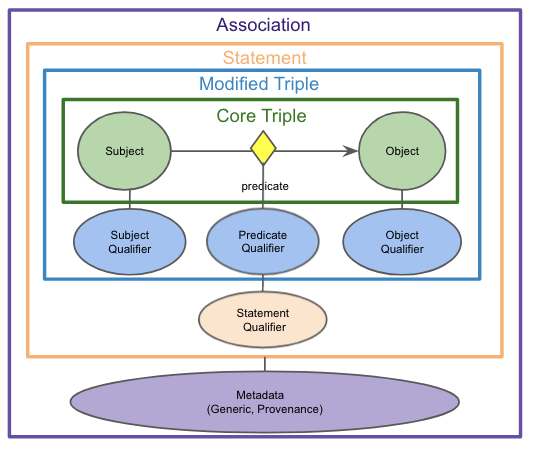 Instances of these Entity classes are represented as nodes in a graph.

All these classes are arranged in a hierarchy with the root of all entities being the named thing class.

To add an entity class to Biolink Model you need to determine the following:

As an example, let’s consider the definition of the entity class gene:

In the above YAML snippet, is_a, aliases, slots, exact_mappings, and id_prefixes are slots from linkML where each slot has a specific meaning and they add semantics to the class definition.

In addition to the aforementioned slots, linkML provides ways to leverage mixin classes to reuse certain slots across different classes.

Say you want to use the mixin class thing with taxon that defines an in taxon slot.

You can achieve that as follows:

In the above YAML snippet, we are explicitly defining the entity class gene to have in taxon as a slot in addition to all its slots, its parent slots, and all of its ancestor slots.

There are other linkML slots that can be used to define your class and further capture the semantics of your class.

These modeling principles/desiderata have guided modeling choices throughout the qualifier-based approach to adding Association classes in Biolink.

As an example, let’s consider the definition of class chemical affects gene association:

In the above YAML snippet, we first define the class chemical affects gene association as a subclass of association and then we define the slots that this class will have. Many of these slots represent qualifiers that are used to refine the meaning of the association. For example, object form or variant qualifier is a slot that is used to describe when a “mutant form” of a gene is used in an assertion. This allows us to both represent that the gene of interest (the object) is somehow related to the chemical of interest (the subject), and also that more specifically we may be talking about a “mutant form” of the gene. “mutant form” is a biolink:object_form_or_variant_qualifier. This kind of modeling allows us to increase connectivity in graphs by using a core biological concept (gene) but also be more specific and nuanced about the meaning of the association by qualifying the concept (gene) with a more specific form of “mutant form” of that concept.

For more information on qualifiers, please refer to Understanding the Model

A predicate is a slot that links two instances of a class.

To add a predicate to Biolink Model you need to determine the following:

As an example, let’s consider the definition of slot interacts with:

In the above YAML snippet, domain, range, description, is_a, in_subset, symmetric, exact_mappings and narrow_mappings are slots from linkML where each slot has a specific meaning and they add semantics to the slot definition.

To add a node/edge property to Biolink Model you need to determine the following:

As an example, let’s consider the slot name which is a node property:

As another example, let’s consider the slot relation which is an edge property:

In the above YAML snippets, is_a, aliases, domain, range, description, in_subset, required, slot_uri, exact_mappings are slots from linkML where each slot has a specific meaning and they add semantics to the slot definition.

There are other linkML slots that can be used to define your class and represent the semantics of your class.

In the previous sections there were references to mappings and differentiating these mappings based on their granularity, which can be a bit of a nuanced exercise.

Here is a rule of thumb on how to determine the granularity of mapping:

The NCATS Biomedical Translator Consortium has adopted Biolink Model as an open-source upper-level data model that supports semantic harmonization and reasoning across diverse Translator ‘knowledge sources’. The model serves a central role in the Translator program and forms the architectural basis of the Translator system, as described below.

To achieve its ambitious goal, the Translator project assembled a diverse interdisciplinary team and a variety of biomedical data sources, including electronic health record data, clinical trial data, genomic and other -omics data, chemical reaction data, and drug data. There are hundreds of data sources in the Translator ecosystem, each of which had its own data representation and were in formats that were not compatible or interoperable. Moreover, groups within the Translator Consortium had integrated the data sources as knowledge sources within independent KGs, but these KGs were developed using different technologies and formalisms such as property graphs in Neo4j and semantically-linked data via RDF and OWL.

In order to interoperate between knowledge sources and reason across KGs, Biolink Model was adopted as the common dialect, thus enabling queries over the entire Translator KG ecosystem. The result was a federated, harmonized ecosystem that supports advanced reasoning and inference to derive biomedical insights based on user queries.

An example Translator use case involved a collaboration with investigators at the Hugh Kaul Precision Medicine Institute (PMI) at the University of Alabama at Birmingham. PMI investigators posed the following natural-language question to the Translator Consortium: what chemicals or drugs might be used to treat neurological disorders such as epilepsy that are associated with genomic variants of RHOBTB2? The investigators noted that RHOBTB2 variants cause an accumulation of RHOBTB2 protein and that this accumulation is believed to be the cause of the neurological disorder.

(see Figure 2 below). Because of the hierarchical structure of the Biolink model, the use of biolink:related_to also will return more specific predicates such as biolink:negatively_regulates and biolink:positively_regulates. The objective was to identify drugs or chemicals that might regulate RHOBTB2 in some manner and thereby reduce the variant-induced accumulation of RHOBTB2 and associated neurological symptoms. As all nodes and edges within the Translator KG ecosystem are annotated to Biolink Model classes and attributes, a Translator query can be constructed from a natural-language user question and return results across a multitude of independent data sources. In addition, because the model employs hierarchical classes, with inheritance and polymorphism, natural-language queries translated to graph queries using Biolink Model syntax can be constructed at varying levels of granularity and return results from all levels of the hierarchy. Finally, because Biolink Model provides attributes on both edges and nodes that record provenance and evidence for these knowledge statements, each result is annotated with the trail of evidence that supports it.

When Translator team members sent the query to the Translator system, it returned several candidates of interest to PMI investigators, including fostamatinib disodium (CHEMBL.COMPOUND:CHEMBL3989516) and ruxolitinib (CHEMBL.COMPOUND:CHEMBL1789941). A review of the supporting evidence provided by Translator indicates that these are approved drugs that either directly or indirectly reduce or otherwise regulate the expression of RHOBTB2. Thus, Biolink Model helped Translator teams bring data together into a single system, thereby reducing the burden on the user to find and manually assemble data from these independent resources (see citation below).

Figure 2. An overview of the Translator architecture that supports biomedical KG-based question-answering, including the role of Biolink Model, in the context of an example question. In this example, a user has posed the natural-language question: what chemicals or drugs might be used to treat neurological disorders such as epilepsy that are associated with genomic variants of RHOBTB2? The question is translated into a graph query, as shown in the top left panel, which is then translated into a Translator standard machine query (not shown). The KG shown in the second panel from the left is derived from a variety of diverse ‘knowledge sources’, a subset of which are displayed in the figure, that are exposed by Translator ‘knowledge providers’. Biolink Model provides standardization and semantic harmonization across the disparate knowledge sources, thereby allowing them to be integrated into a KG capable of supporting question-answering. In this example, Translator provided two answers or results of interest to the investigative team that posed the question, namely, fostamatinib disodium and ruxolitinib, as shown in the bottom left panel.